Welcome to the Owls' Class Page! Keep checking back for news and photographs of the things that we have been up to!

Happy half term to you all! I've just stumbled across a competition being run by The Guardian Children's Books - you can win a framed Pottermore print and an exclusive Hogwarts Express ticket! There are certain Harry Potter fans in Year 5 that I thought of immediately! Click on the photograph below to access the competition page: 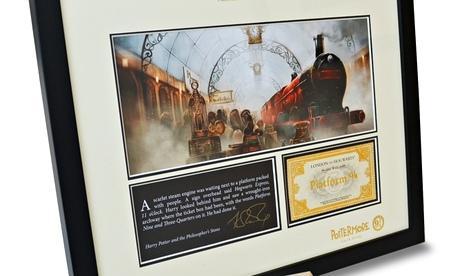 This year marks the 150th anniversary of the publication of Alice's Adventures in Wonderland and, to mark this, we are celebrating with our very own Alice's Adventures in the Classroom! The Owls are working towards creating their own characters and settings for their very own 'Forgotten Chapter' of Alice. This week, we read 'Pig and Pepper', the chapter set in the Duchess' palace kitchen and had huge amounts of fun deciding what could happen to make the chaos in the palace kitchen even more chaotic! The children then wrote about this from the perspective of the Cheshire Cat lying by the fire, describing how they watched the chaos unfolding before their eyes ... I don't think I've ever laughed so much marking Big Writes! FABULOUS job, Owls! 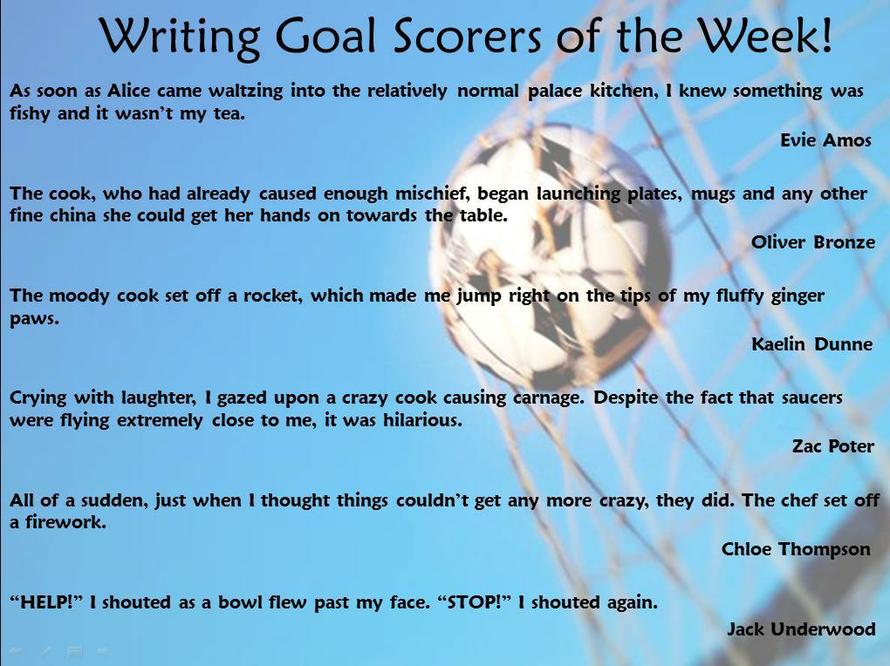 Reflecting on the end of the Spring Term and looking back through all the photographs has made me realise just what a busy, exciting few weeks it was! The Owls threw themselves into everything that we did, well and truly earning a rest over the Easter holidays!

Here are a few of our highlights!

The bright and early start on the last Monday of term turned out to be well worth it for the incredibly exciting day we had (in the sunshine!) in North Norfolk with Aylmerton Field Study Centre. This was the culmination of our Rivers topic and enabled the Owls to experience everything that we have learnt about rivers for real ... in a real river! We followed the River Glaven from as close as we could get to the source to the mouth and stopped to take measurements at three different points, investigating how features such as the width, depth and velocity changed as we got closer to the mouth. Because "WE ARE RIVER CROSSERS!", this definitely meant jumping in the river ... lots and lots of smiles and laughter and lots and lots of pairs of wellies filled with water! Wellies filling with water became less of a problem when we reached Blakeney and our wellies and socks came off completely! We finished the day by wading through the River Glaven at low tide and squelching through the mud ... lots and lots of squealing as it squidged up through our toes and lots and lots of singing "Feeling hot, hot, hot!" as we waded through the freezing cold water!

All hail Miah Man, Queenie and Sweaty Betty, the instructors from AFSC, for giving us so many wonderful learning experiences - it didn't feel like we were learning at all! And all hail the Owls for representing St. Andrew's so beautifully and being an absolute pleasure to spend the day with - you made me feel so proud to be your teacher!

The final week of the Spring Term also heralded the eagerly awaited Easter Enterprise! We knew that we had one day less to prepare than all the other classes, having been out on our trip all day on the Monday, so it was all stations go as soon as we returned to school; I was SO impressed by just how hard the Owls worked and pulled together as a team under pressure! They took responsibility for everything, from creating persuasive posters to advertise our Easter Egg Hunt to calculating how many sheets of Easter eggs we could afford to print to allocating roles to each class member to making giant red arrows leading the way through the Hall to our classroom! Judging by the amount of parents that were spotted around the school with handfuls of Easter eggs, I think the Owls' persuasive tactics were successful! Congratulations to Mrs Skeet and Mrs Amos, who won the prizes for collecting the most Easter eggs! Egg-cellent entrepreneurial skills, Owls!
Making our faces funny for money for Comic Relief! Thank you, Owls, for doing such a fantastic job of making my face and hair funny for money - it only took five washes to get all that wax out of my hair!
Monday 24th November 2014
I am typing this at the end of SUCH an exciting day!

What a treat we had this morning ... Fiona Pennie, a GBR slalom canoeist who competed at the 2008 Beijing Olympics, visited St. Andrew's! Fiona gave the whole school an incredibly inspiring presentation, which gave us an insight into her experiences of competing internationally and showed us the importance of aiming high and persevering if we are to make our dreams become a reality. The Owls were then lucky enough to have their very own warm-up session with Fiona ... not everybody can say they've participated in a warm-up session led by an Olympic athlete!
We then spent this afternoon at Forest School, consolidating our understanding of how fractions represent parts of a whole. In their groups, I challenged the children to create their own 'Fraction Wonderwalls' out of sticks ... which is much harder than it sounds and involved rather a lot of problem-solving, as the Owls soon found out!

Mrs. Pilgrim, Mrs. Howlett and I were blown away by the children's efforts! They worked together so well in their groups to tackle the challenge, applying their existing knowledge, building on each other's ideas, striving for accuracy ... and smiling along the way! What stars you are, Owls - the way that you showed such great learning in a different environment made me incredibly proud. I still can't believe how accurately you managed to split each line into equal parts - what wonderful Fraction Wonderwalls!

This half term's 'To Infinity and Beyond' topic is now in full swing and not a day goes by when I don't finish the day feeling excited by the fabulous work that the Owls have produced!

Work around The Story of the Blue Planet, by Andri Magnason, has continued in Literacy; originally published in Iceland, this novel won the UKLA Book Award 2014, which is an award that celebrates high quality children's texts. The groan that I am often met with when I close the book suggests that the Owls agree with the judges' choice of winner! You can find out more by clicking on the picture of the below, which will take you straight through to the author's website:
Lots of drama, role-play and talk have provided inspiration for the children's writing ... and my goodness, what fantastic Big Writes this week, Owls! I have had so many 'fall off my chair' moments marking them this weekend! Congratulations to this week's Goal Scorers:
This week, we ventured outside to recreate the solar system using various pieces of fruit and a toilet roll to help us understand the relative sizes of and distances between the planets. Each square of toilet paper represented 10 million miles! Once we had created our perfectly-to-scale solar system, we could easily see that the four planets closest to the Sun are much closer together and smaller than the four planets furthers away from the Sun. We decided that there isn't a piece of fruit big enough to represent the Sun - we learnt that it is one million times bigger than the Earth and we couldn't think of a piece of fruit one million times bigger than a cherry tomato! 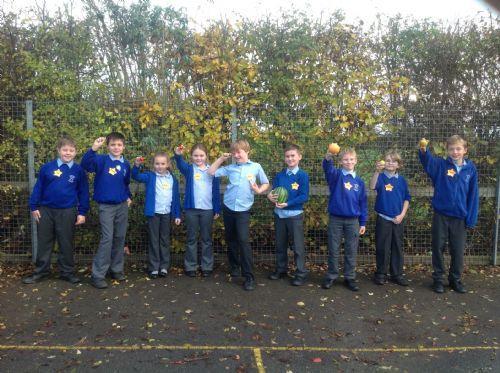 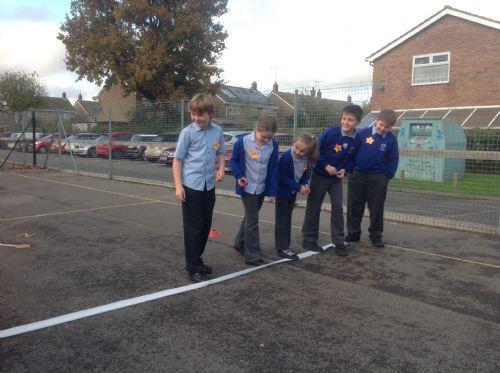 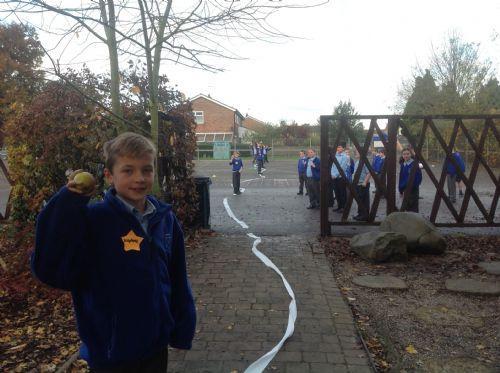 It was wonderful to see so many of you at our Learning Together last week - the finished stomp rockets look spectacular and we are very excited about launching the rest of them over the next few weeks! Watch this space! 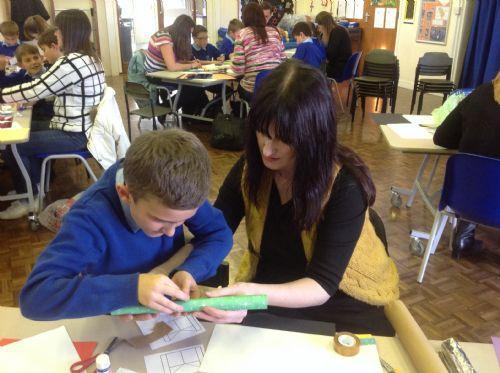 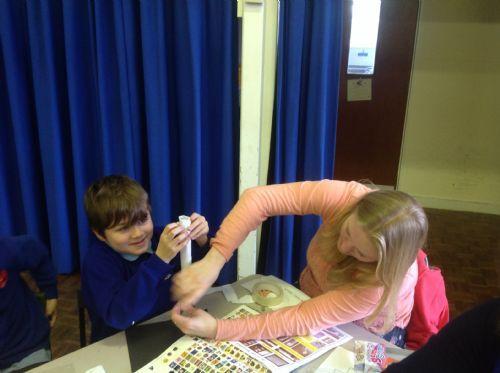 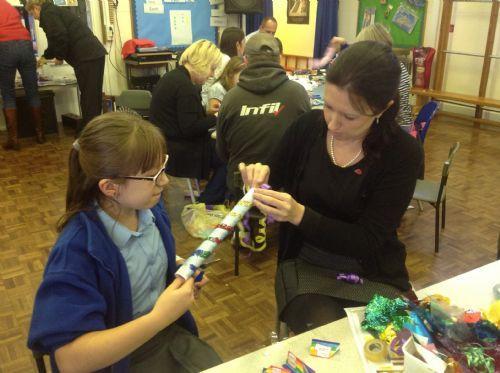 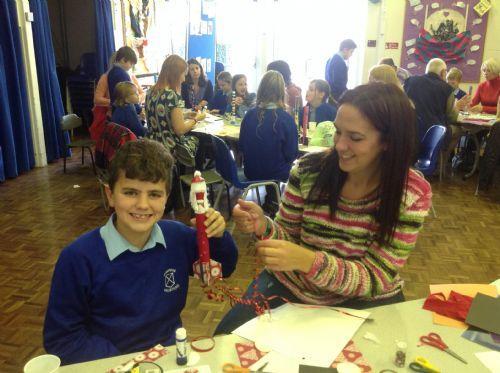 Friday 7th November 2014
Friday 3rd October 2014
Wow! What a busy first few weeks we have had! The Owls have all settled in to Year 5 beautifully and are already proving themselves to be 'wand'erful learners!

During the first week of term, the Owls voted for our new Vice House Captains. Huge congratulations to Eleanor, Izzy, Thomas and Zac, who have now taken up their new roles:
Our 'Magical Mayhem' topic for this half term has been a hoot so far! Based on Harry Potter and the Philosopher's Stone by J.K. Rowling, the novel has been the inspiration for learning across the curriculum.
In Maths, we have been consolidating our understanding of how to use formal written methods of addition and subtraction. Last week, the children imagined that they were about to begin their first year at Hogwarts School of Witchcraft and Wizardry and spent the morning shopping at Diagon Alley (after managing to persuade me that an allowance of no less than £11,000 would suffice!). Lists of Hogwarts uniform packs, owls, Quidditch equipment, spell books and wands were compiled and some children even found time to stop off at the Leaky Cauldron for some butter beer and a snack, all included in their running total, of course! I threw in the challenge of reaching the total closest to £11,000 without going over and, as Oliver B was heard exclaiming half way through a rather large calculation, "This is intense!". Finishing within £1 of the target, Eleanor's total was closest with many others hot on her heels - what great Math-magicians you are, Owls! 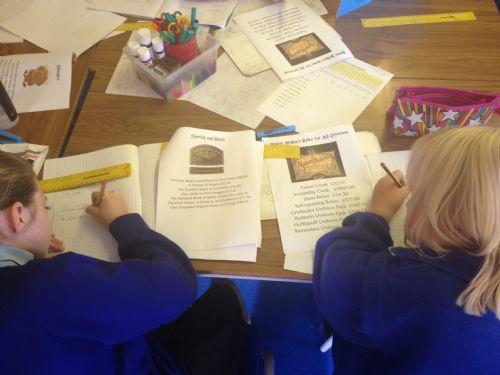 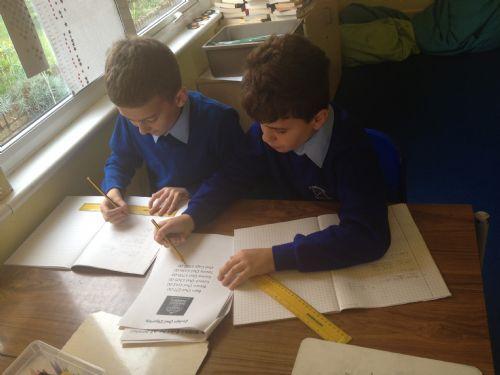 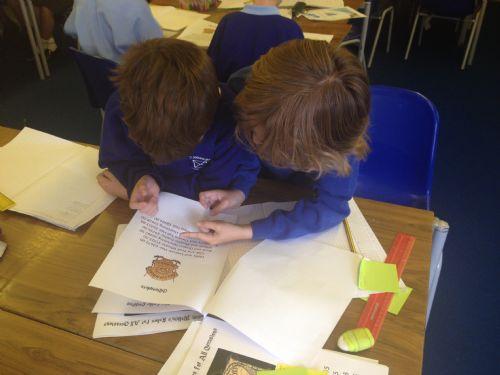 We have been reading Harry Potter and the Philsopher's Stone in English, using each chapter as a stimulus for a range of activities that have, in turn, supported our writing. This week, we have been focusing on 'The Sorting Hat', the chapter in which Harry first arrives at Hogwarts and the students are sorted into their Houses during the opening banquet. The Owls have been divided into four groups, each of which has taken on the role of first year students in one of the four Hogwarts Houses. After spending some time exploring the Sorting Hat song, which details the specific characteristics of students in each House, the Owls wrote letters to Dumbledore to convince him that they have what it takes to be in their House. I am SO thrilled with your writing, Owls - choosing Goal Scorers felt like mission impossible!

At the beginning of next week, we will be writing our letters out on parchment and posting them to Dumbledore in the Owl Post ... to be followed by our very own Sorting ceremony! I wonder whether the Owls have done enough to convince Dumbledore and the Sorting Hat that they are worthy of admission to their House! Can you tell by the traits they are describing which of the four Houses these children are hoping to be selected for?!
In other news, huge congratulations to the Owls for winning Reading Stars for the third week running - another lovely, new book to add to our class bookshelf and so fabulous to see so much excitement about reading! Keep up the incredible effort that you are putting into reading at home, everybody, and remember that your Guided Reading homework counts too! Let's go for a record-break next week!

The United Kingdom Literacy Association have announced the long list for their Book Award this week, an award which celebrates high quality children's literature. I have added a link at the bottom of our class page - it is well worth a look at the books that have been longlisted. Several of them are on our bookshelf already and more will no doubt appear over the coming weeks!
Top
Cookie information
Cookie Notice